I've just finished two weeks at Bosque del Apache where I photographed so much, and slept so little, that it has been a struggle to keep the blog up! I left Bosque yesterday morning and headed down to White Sands National Monument for a quick overnight trip - which gave me one sunset and one sunrise to photograph the dunes (will share those photos in the next post). I left White Sands late this morning and am now near the town of Portal in the Chiricahua Mountains of southeastern Arizona. I've been here once before - about a dozen years ago - but I had forgotten how beautiful it is. The Chiricahuas are simply spectacular! I expect to spend a week or more here and each day will be torn between photographing the scenery and the birds, for which the area is famous.

Before I start showing you photos from White Sands and the Chiricahuas, I have to share a few more of the thousands of photos I shot at Bosque.

And on a side note, the first photo in my last blog posting (right below this one) - the image of the snow geese blast off - will accompany a column on me and some of my unconvential photo tips in an upcoming issue of Popular Photography. I'll keep you posted when it comes out.

All below photos taken with EOS 1Ds mIII 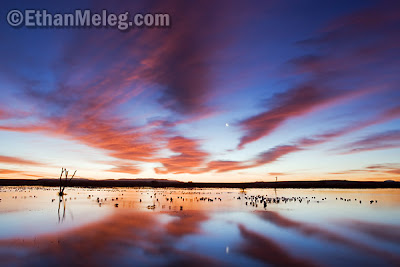 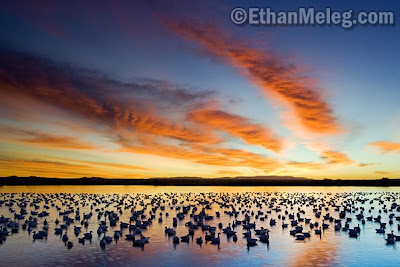 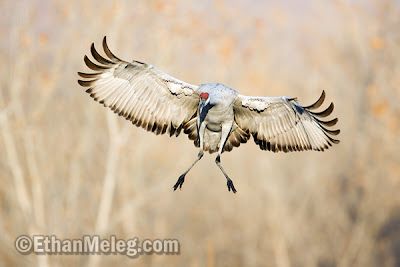 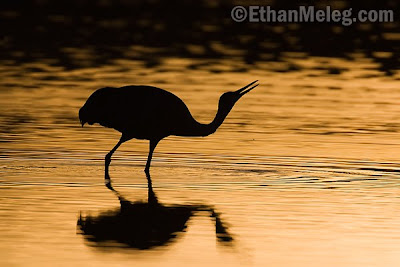 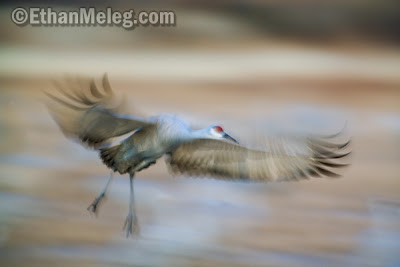 I'm midway through 2 weeks photographing at Bosque del Apache with my friend Chris Dodds (http://chrisdoddsphoto.com) from Quebec. The Bosque is a refuge in central New Mexico that is famous for its huge numbers of Snow Geese and Sandhill Cranes that congregate here during fall and winter. This is a bird photographer's paradise. The last time I was here was almost 15 years ago and I had forgotten just how good it is. During the past week I've shot over 5,000 frames and can barely stay up each night to edit the day's photos. [my eyes are weary as I write this]

This morning was particularly outstanding... as Chris says 'epic'. The wind and light created perfect conditions to photograph inbound Snow and Ross's Geese. I probably shot more pictures this morning than any other day, ever. I've barely started editing the photos but here a few early favorites. 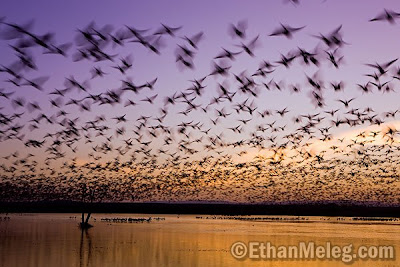 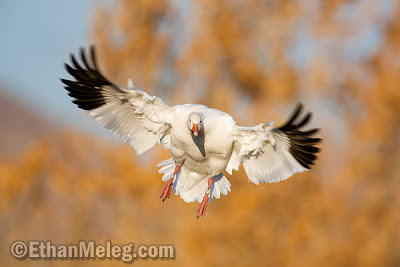 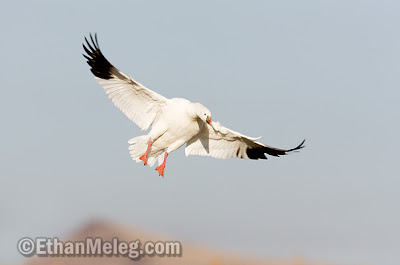 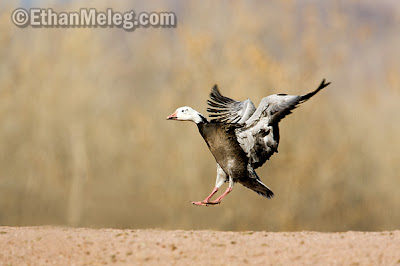 Photo 5: Coyote
This Coyote was walking on a canal bank and I was able to get only a few photos from the van window using a beanbag for stability. It pays to be ready!
500mm IS lens + 1.4x teleconvertor
ISO 400; Aperture Priority; 1/320s @ f/8 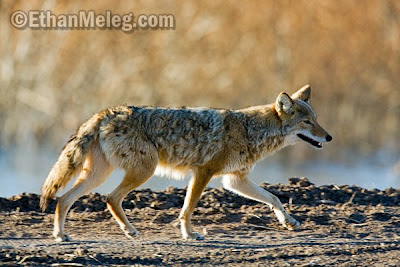 I'm currently shooting waterbirds in central New Mexico. The days have been long (up each day at 4:45am) but very productive! Here are some of my favorite photos from the past couple days. All taken with a 1DS mIII, 500mm IS lens and 1.4x or 2x teleconvertors. 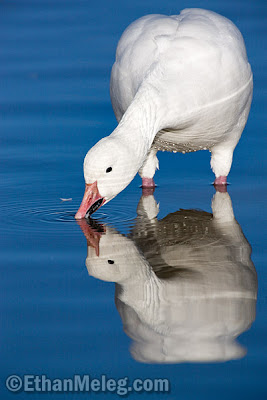 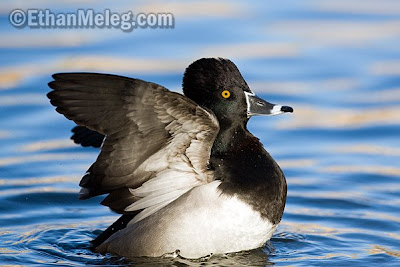 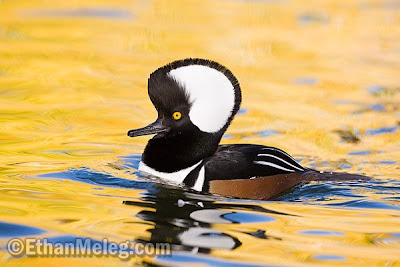 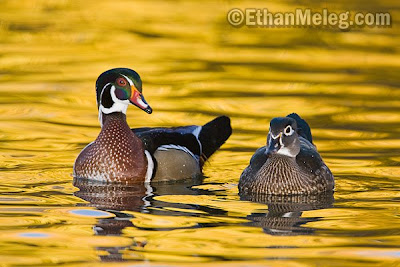 I arrived in the Bosque del Apache area yesterday morning and have barely stopped photographing since. I'm so tired right now I can barely keep my eyes open. Here are some initial photos. Will post more when I get a chance.

All photographed with EOS 1Ds mIII and 500IS lens with 1.4x or 2x teleconvertors. 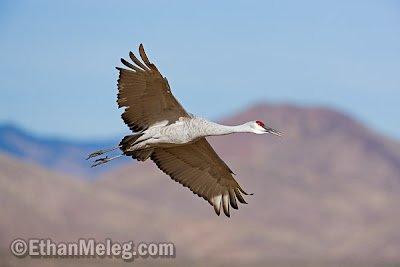 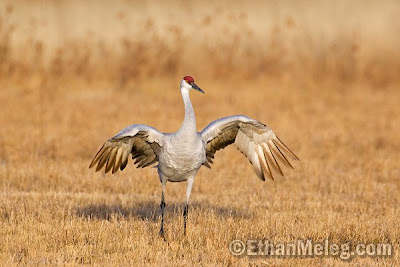 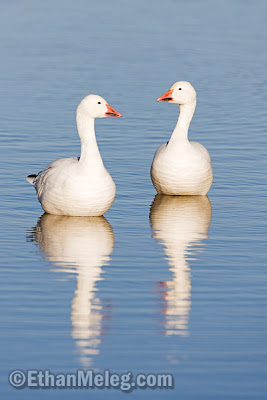 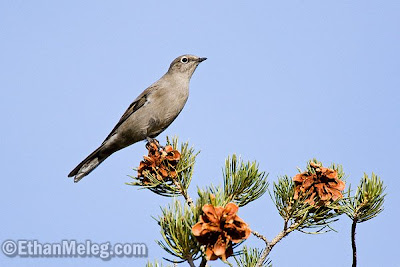 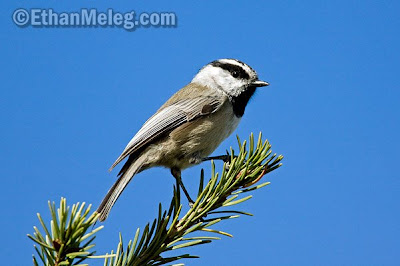 One of the places that I've wanted to see and photograph, probably more than any other spot in the southwest, is the famous "Wave" in Paria Canyon. You need a permit to go there and there is a daily quota of 10 walk-in permits. There are more people that want to go than available permits, so you have to show up the day before and try for a spot by lottery. I tried a couple days ago but without luck. Yesterday I gave it a second shot and won one of the 10 coveted permits. Unfortunately, the weather forecast for today was terrible -- overcast with a chance of rain. I lowered my photo expectations and prepared for drab light conditions.

In anticipation of the hike, I woke up early this morning and inhaled copious amounts of porridge to keep me fueled through the day. During breakfast the clouds went fiery red for sunrise, but lasted but a few brief moments before succumbing to thick overcast. What a tease!

I hiked out with some great folks who I'd met the day before - Jack, Linda and Andrew. We made great time over the rough terrain (3 miles each way) and arrived at the Wave mid morning. Seeing the Wave for the first time left me awestruck. It is quite simply one of the most remarkable rock landscapes I've seen anytime, anywhere. I think the only words I could muster were 'holy shit'.

Photographing the wave was a challenge in the poor light. I tried various polarizers to try to add some punch to the subdued colors and used ND grads on the sky to add drama. This was my one chance in a long time to shoot this place and I was going to make the most of it.

Would you believe that around noon, just while contemplating leaving, the overcast skies broke to blue skies with puffy white clouds. I photographed like mad for the brief window of time... it only lasted about a half hour before the clouds choked back in again. It started spitting rain as we finished our hike out. Damn, I am lucky! 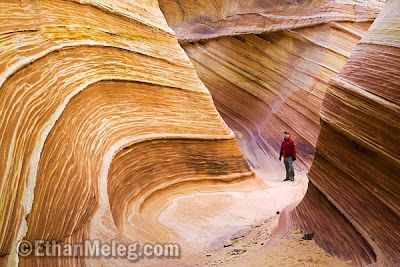 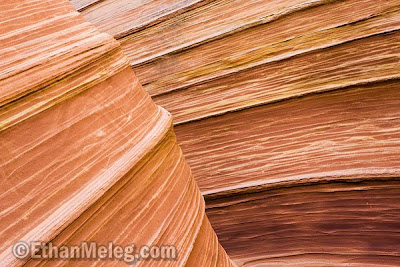 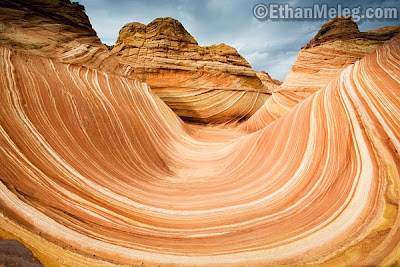 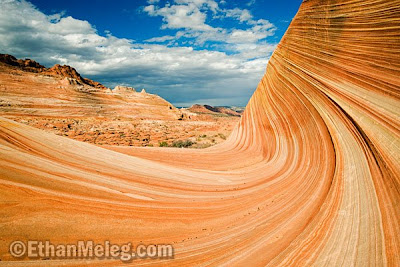 I'm off to Petrified Forest National Park tomorrow before heading into New Mexico to meet up with my friend Chris Dodds to photograph birds at the legendary Bosque del Apache refuge. Lots of more photos to come..........
Posted by Ethan Meleg at 11:48 PM 8 comments:

"The Subway" in Zion National Park

Yesterday I photographed the famous "Subway" slot canyon in Zion National Park (scroll down to see photos). Let me describe the hike for you. [please note that I am out of shape and carry far too much camera gear with me]

You start the hike by going down an extremely steep trail (the surface is loose rock) which basically plunges into a canyon. Apparently at least one person has strayed from the trail and fallen to their death. Once you get to the bottom, you have to walk a few miles up a river. Sometimes there is a small trail, sometimes you walk in the water, sometimes you are clambering over boulders. Then you reach a slippery cascading waterfalls (which you climb up) and shortly thereafter you arrive at the star attraction - a small slot canyon called the Subway. The rocks around the Subway are slicker than a wet ice rink. The more expensive the camera gear you have, the more slippery the rocks are.

I spent hours in the Subway, much of that time standing in cold, ankle deep water. The light kept improving later in the day and I had a hard time dragging myself away, but alas I needed to make the long hike out before it got too dark. Interestingly, somehow the trail had become longer and more rugged throughout the day. I ended up trekked out with another photographer who must have been an Olympic hiker.

By the time I got back to the spot where you climb up to the top of the canyon, I was already physically wasted. Going back up that canyon trail can only be described as sadistic punishment. I could manage maybe 50-100m up at a time before having to stop, pant like I had just run a marathon and spend a few moments wishing that I was dead. Alas, words cannot describe the sheer pleasure I felt upon reaching the parking lot at the top.

All in all, hiking to the Subway was a fun adventure and I'm happy with the photographic results. Having said this, I am enjoying a very lazy day today sitting drinking coffee in the town of Springdale at the Pioneer Lodge Cafe (great spot!). 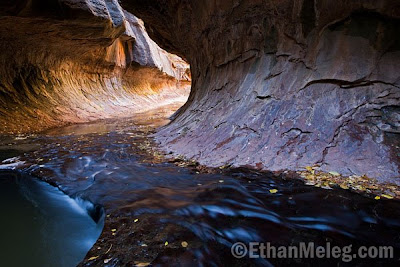 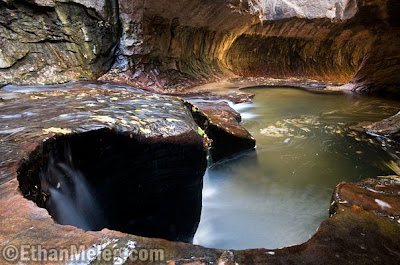 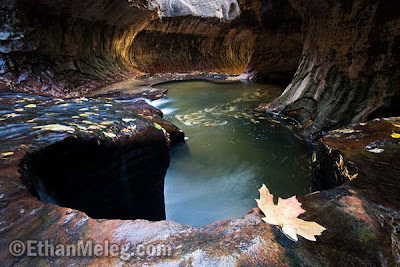 The famous Watchman shoot in Zion

The last couple days have been pretty dull for photography. It's been overcast with some rain and a thunderstorm even blew through this morning. Thankfully the skies broke after it and the rest of the day was sunny. Late this afternoon it started clouding over again and I was worried there would be no evening shoot. Even though I was tempted to pack it in for the day (was thinking about cold beer), I decided to go to 'the bridge' famed for it's vantage point to shoot sunset on The Watchman over the Virgin River. Am I ever glad I did - it turned out to be a spectacular sunset. I shot hundreds of images and stayed until well after dark. Here are a couple of the results.
Tomorrow I'm making a full day trip to the Subway slot canyon. I can't wait!

Photo 1: The photographers start lining up to get the best spot (I had it). See the black tripod with no camera on it and no person - that's where I was. 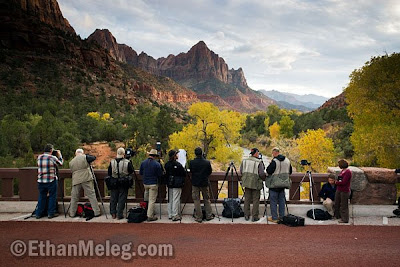 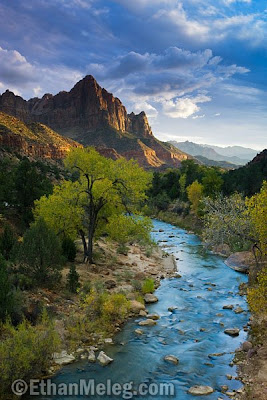 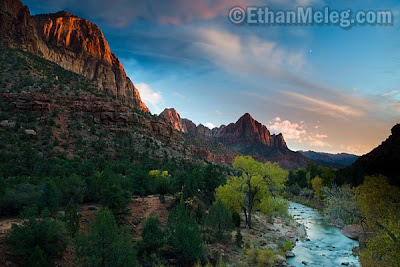