The Racetrack - at last

You may recall from an earlier post my failed attempt to get to the 'Racetrack' in Death Valley because the rear shocks on my van exploded on the rough road. I've been plotting my return ever since and finally gave it a shot this week. I had been well advised about the rugged condition of the road, infamous for causing flat tires and other various mechanical issues. Rumour is the cost of a tow back from the Racetrack can run you upwards of a couple grand.
I approached the drive with trepidation and figured the key was to go slowly.... very slowly (which is not an easy thing for me to do). I even resorted to using reverse psychology on myself with a personal challenge: how slowly could I possibly drive and still get there? And so I began the trip, with the new U2 album loaded on my iPod, to help take my mind off how painfully slow I was moving. This was going to be a long 43km (27 mile) drive.
I've driven famously shitty "roads" in central and south America, but the road to the Racetrack is easily the king of washboards (see photo below). The objective of these evil ripples it to make your drive as punishingly uncomfortable as possible and to destroy your car. I tackled them by virtually idling along at about 2okm/hr. At one point during the drive, I was passed by a desert tortoise walking backwards.
After 2.5 hours I was elated to arrive at the Racetrack playa with the legendary windblown rocks. The plan was simple: shoot for the evening, camp out overnight and photograph again in the morning before driving back out.
The sky was perfectly clear for both evening and morning, which made for a tough shoot. The mountains that surround the playa cause abrupt sunrises and sunsets, so the rocks quickly transition from light to shadow. A few clouds would have been ideal to create dramatic light and skies, but the photo gods were not with me. Below are a few of the resulting photos. And yes, I'm going to have to go back there again when there are clouds in the forecast!
Photo 1: Washboard road to the Racetrack 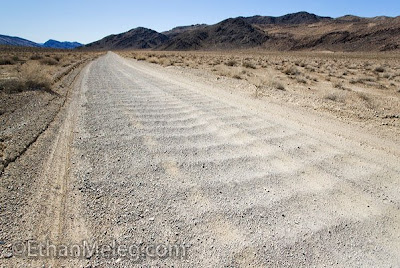 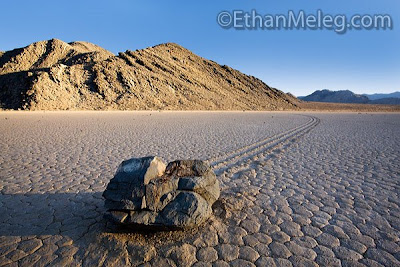 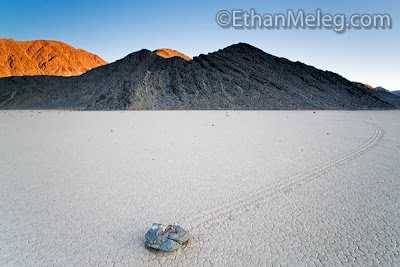 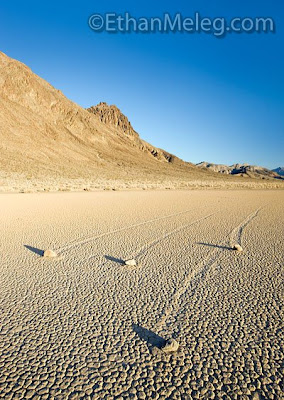