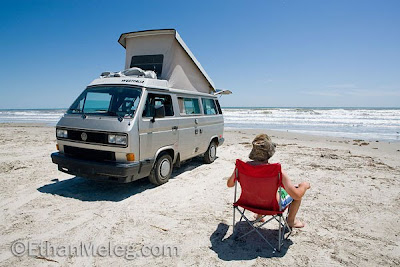 Above photo: "Turtle" and I on the Texas coast in April.

I've parted ways with "Turtle", my VW Westfalia van/home for the past year. Why the name "Turtle", you ask? It was my shell, providing refuge from intense desert sun, frigid nights and coastal downpours during my travels. And like most VW Westy vans, it was very slow... especially on hills!

Turtle and I had a love/hate relationship, exploring incredible landscapes but also stopping frequently to share my life savings with repair shops. A young couple bought the van yesterday to begin their own journey southwest. Lucky for them, most of the major repairs have been completed!

With some extra cash in my pocket from selling the van, I bought the new Canon 24mm Tilt-Shift lens yesterday. There have been some great reports about this lens from other photographers (FYI, I never buy a piece of camera gear as soon as it's released... I wait for several months until its been tested by others).

There are a couple of huge benefits of Tilt-Shift lenses for landscape and outdoor adventure photography:
-not distorting objects such as lighthouses, trees or people (which 'bend' with typical wide angle lenses)
-more depth of field... allowing for faster shutter speeds and sharper images because you are able to shoot at optimal apertures such as f/8 or f/11 and still get full depth-of-field.

Expect to see some images with the new lens in coming posts.... I can't wait to get out shooting with it!

Incidentally, I would have preferred the extra wide focal length of  Canon's new 17mm TS lens, but the front lens is convex, so it's not possible to put a polarizer on it. Darn!

Twittering? Yes, it was only a matter of time before I'd get with the times and start twittering. Click this link to stay current with what I'm up to: Follow Ethan on Twitter

Thanks and happy shooting!
Posted by Ethan Meleg at 9:46 PM