I'm in Death Valley National Park in eastern California. The park is a landscape photographer’s dream, with its varied and almost surreal terrain. Yesterday I visited the Badwater Basin – the lowest spot in the US - where I fried bacon for breakfast at 282ft below sea level. Very cool! 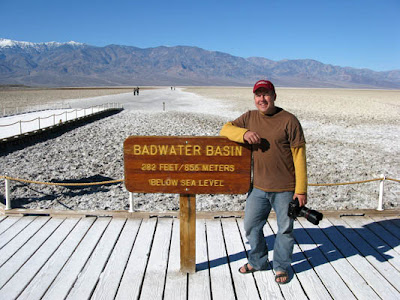 The afternoon plan was to make it to the “Racetrack", a salt flat where small boulders, presumed to have been blown by strong wind, have left their tracks across the playa. This is one of the top 5 places I wanted to photograph in the southwest.

Getting to the Racetrack requires driving 27 miles on a gravel road which is described as "famously bad". The park ranger told me to drive very slowly or it would cause serious damage to the vehicle. I should have listened better!

Approximately 5 miles down the washboard "road", one of the rear shocks on my van exploded. Abandoning hope of getting to the Racetrack, we turned around to figure out where the heck we'd find auto parts and a mechanic. Halfway back to the main road, the other rear shock also exploded. Thankfully the van was driveable and there was a town about an hour and a half away where we found new shocks and a mechanic who was open on Sundays. Everything worked out well and it turned out to be a fairly cheap fix (you can't say that often on VW vans). As a side bonus, this unexpected issue ended up causing changes in plans that lead to two spectacular photo shoots. I'll share some of those photos in the next post. And rest assured, I will get back to the Racetrack... next month. But I'll drive slower - much slower.

Here's the first exploded shock on my van. I used string to stop the bottom half from dragging on the road. 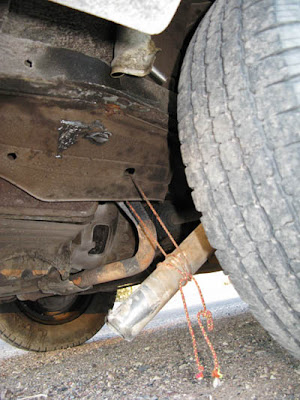 And here's me “communicating” with my buddy Chris while I surveyed the damage. He was laughing hysterically about the incident. Can't really blame him, I would have done the same! 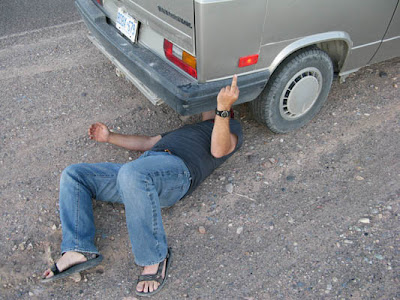 By the way, I always carry a point and shoot camera (a Canon G9) to capture special moments like these!
Posted by Ethan Meleg at 6:41 PM