Quest for the Lewis' Woodpecker

Of the species of birds that I have always wanted to see, Lewis’ Woodpecker has been at the top of the list. I’m not sure what it is about this bird, but it has captivated my interest for decades.

I’ve been following the bird reports hoping to find a Lewis’ location that meshed with my travel plans. Thankfully, several had recently been sighted in the San Bernardino Mountains at Silverwood Lake State Recreation Area. I added it to my itinerary.

When I arrived at the park a few days ago it was closed due to heavy snowfall. I opted to camp nearby, hoping that that the conditions would improve and the park would reopen. Thankfully the next morning was sunny and warm, which melted the icy park roads. I was waiting at the gates when the ranger opened the park mid morning.

I searched for a long time in the area where the birds had allegedly been hanging out, but to no avail. Finally, as I was walking back to the van - ready to pack it in and head to the coast - I made one last scan. In the distance there was a lone bird sitting high up on a dead tree. Could it be? Elated, I had found my life (first ever) Lewis’ Woodpecker.

Now that I was on to them, I quickly found two additional Lewis'. After enjoying satisfying views, I rigged up my camera gear with lots of magnification to try for some photos. It was very difficult to get close to them with an unobstructed view, but I kept working until I had a few reasonably clean shots.

That evening, when I went to download the memory card to see my precious photos, they were all gone! There had been a problem with the card or camera and it appeared that all the files were either lost or corrupted. My heart sunk! After a frantic email to Lexar for technical support, they promptly sent me the recovery software. The photo gods must be on my side, because it worked!

Although these aren't prize winners, I'm just plain excited to have any photos of Lewis' Woodpecker! 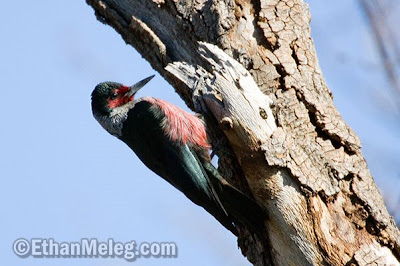 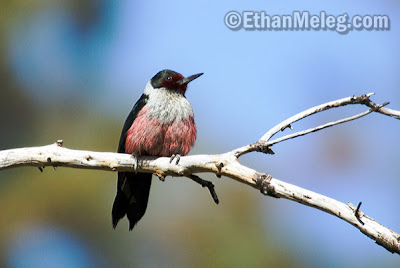