A -27C windchill made it awefully difficult to find the motivation to get out of bed for a photo shoot this morning. The cold air temperature was causing a heavy mist from the surface of Georgian Bay which froze on the surrounding shoreline trees. It was a magical scene that could not be missed. I drank a big cup of coffee, dressed up in about 5 layers of clothing - including my very unfashionable, but extremely warm "Elmer Fudd" hat - and drove down the street to the Big Tub Lighthouse.

Strong winds were blowing spray all over everthing, including me and my camera gear. I found a spot in the trees that offered a bit of shelter and went to work. To prevent blurring of the moving branches, I clicked the shutter during calm periods between gusts of wind. 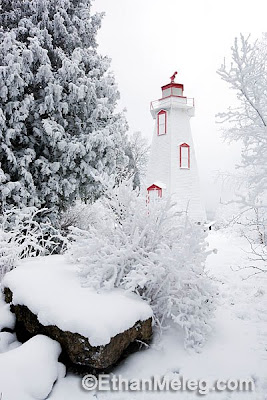 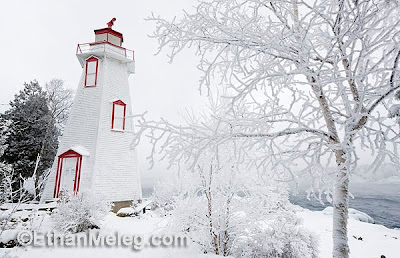 Photo 2: Canon EOS 1DsIII; TSE-24mm II tilt shift lens; Gitzo tripod & Really Right Stuff ballhead; mirror lock up & cable release. Exposure: ISO 400; 1/30 @ f/16. I was so cold that my brain wasn't working well.... I should have shifted the lens more to correct for the lean of the lighthouse in this photo.

I'm hoping for some sunshine before the frosting is gone from the trees.... that will be the ultimate for the scene!
Posted by Ethan Meleg at 3:26 PM