I arrived on the shoreline at 8am decked out in clothing for a, ummm, hurricane. The waves were the largest I've ever seen on the Great Lakes and were engulphing the 50 ft cliffs adjacent to Indian Head Cove. The best protection I could find was in the lee of Halfway Rock, which offered modest protection from the torrential spray. A plastic bag was all I had with me to protect my Canon 5d mk II and Sigma 70-200/2.8 lens from the water. For an hour, I battled blowing spray to shoot still photos and videos of the best waves I've ever seen. Here's a still photo of the wave smashing over the west side of Indian Head Cove (often mistakenly referred to as the Grotto): 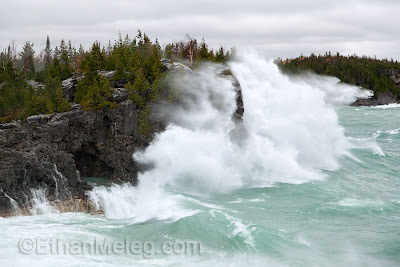 And I couldn't resist shooting video of the same scene:
https://www.youtube.com/watch?v=E0okh6dxfgs&feature=plcp

This was one of the most incredible scenes I've ever shot! My cameras (and myself) were totally soaked, but everything survived without any problems. What fun!
Posted by Ethan Meleg at 11:19 PM