Moved to Owen Sound & great luck with Coyotes this morning 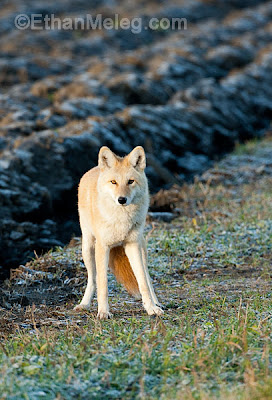 Coyote photographed near Owen Sound this morning.
I've been incredibly busy lately which accounts for the lack of blog posts over the past couple of weeks. First and foremost, I've moved to the town of Owen Sound in a great apartment close to downtown. I'm finally settled in but it was no small task moving my stuff (second floor apartment). I have way too much photography gear; one room is completely jammed with everything from blinds and waders to camera packs and tripods.

My trip to Kenya is coming up in a few weeks so I'm starting to get organized for that. Traveling by plane with tons of camera gear is always a pain in the ass. I'll be fine-tuning the packing of camera gear right up until the last minute.

This morning I went out for a quick photo shoot on the outskits of Owen Sound with my buddy Craig (the guy behind http://www.canonrumors.com/). In early morning light, we stumbled across a pair of coyotes in a farm field close to the road. One of the animals was very pale/tawny in appearance and obliging for the camera. We shot from the van and it was certainly the best opportunity I've had photographing wild coyotes. Immediately afterwards, I locked the keys in the vehicle. The excitement of the coyotes helped to offset the wait for a tow truck driver who was able to unlock the van in a couple of seconds.

Both of these photos were shot with a Canon EOS 1Ds mark III and 500mm/4 lens at ISO 400 from a tripod set up in my van. 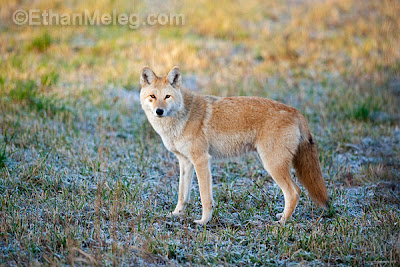