I'm not a big believer in the notion of luck. In photography, you have to be out in the field and prepared for the unexpected. In essence you create your own luck. The photos below are two examples of being in the right place and ready to shoot. 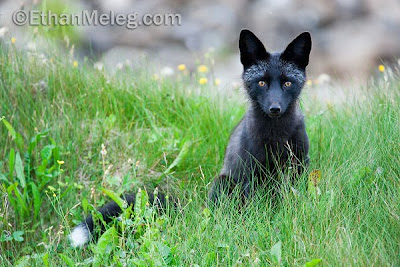 This fox was walking along the roadside, so I quickly got my camera ready and doubled-back. I photographed it out of the side door of my van..... there was only enough time for about 10 shots before it took off.
--
FOX ID UPDATE: Thanks to a couple of other photographers emailing me about the fox - and some internet research - here's more info about it. The species is indeed Red Fox, but the colour morph is commonly known as the "Silver Fox". Apparently this colour morph was created through selective breeding for the fur industry. Animals in the wild may be decendents or cross-breeds with once captive individuals.
-- 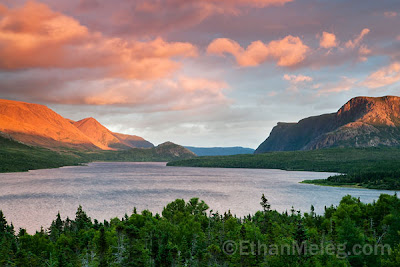 After cooking an exquisite surf & turf dinner over a campfire and sitting down to enjoy a glass of wine, I noticed some glowing clouds (it had been heavy overcast all evening). My friend and I raced over to a grand landscape vista we'd scouted earlier in the afternoon. We had only a couple minutes to shoot one of the most spectacular sunsets of the trip to Newfoundland.
Posted by Ethan Meleg at 11:31 AM 9 comments: 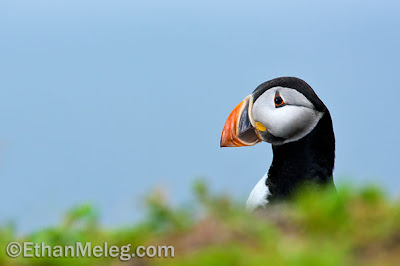 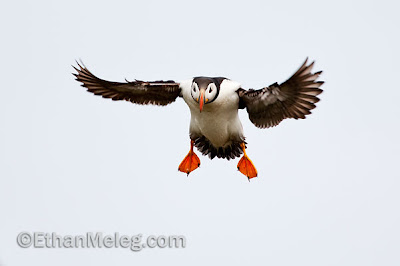 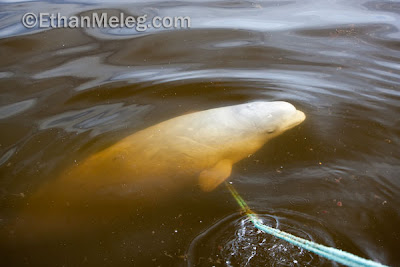 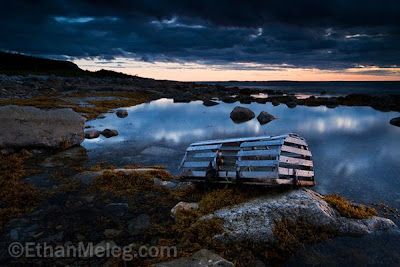 Here are a few photos from the past week of exploring the Newfoundland coast. The scenery has been fantastic and the weather.... well, let's just say that it's classic coastal conditions (fog, rain!). I've been eating fresh seafood daily, in fact eating some as I write this! I'm tired and weary from a very rough boat tour this afternoon to see puffins and whales (too tough to photograph), so I won't write much now. 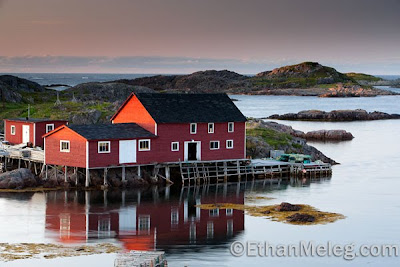 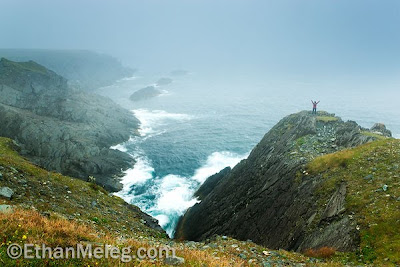 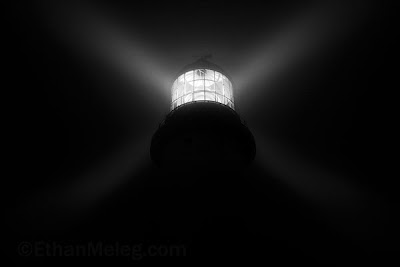 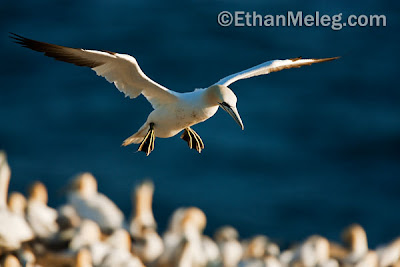 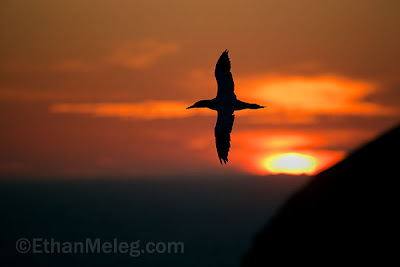 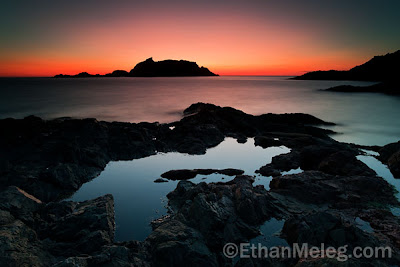 Just a quick posting because I'm photographing on Fogo Island in northeastern Newfoundland and the cellular internet connection is slow. I've been in Newfoundland for only a few days, but it has been incredible. The first place I stopped at was Twillingate (photo above). I literally got out of the van and walked out to a scenic overlook as a pod of 3 killer whales swam by a few hundred feet below. Wow!

All superlatives apply here in Newfoundland. Not just a great place for photography, but a fantastic place to travel in general with the friendliest people you'll ever meet.

So far I've:
-camped in two of the most scenic campsites I've ever found
-ate the best ice-cream I've ever had at "Growlers" in the town of Joe Batt's Arm (had to go back twice just to confirm!)
-ate pan-fried cod, fresh off the boat

Life is good. Check back in a couple of days for more photos. 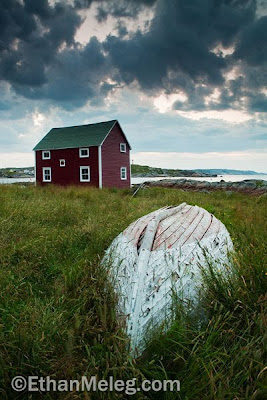 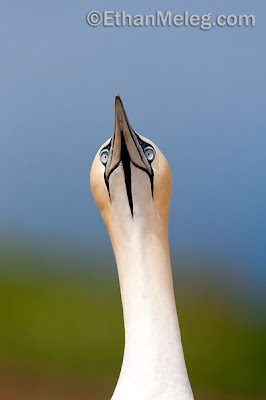 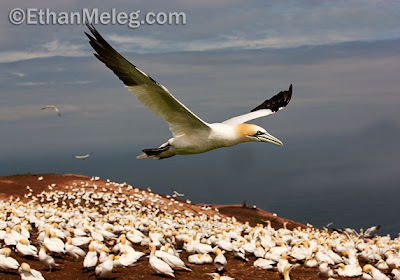 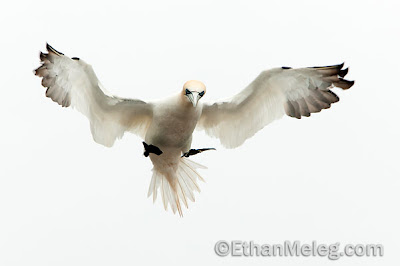 I arrived yesterday on the Gaspe Peninsula in eastern Quebec. It's my first time here and I am blown away by the scenery. The southern coast of the St. Lawrence Seaway reminds me of the Big Sur Coast in California.... vibrant green undulating hills dropping into the sea.

I'm only here for a couple days, so have been busy shooting some of the regional icons. This morning I work up at 3:45 am to hike up a painfully steep 1.8km trail to a lookout tower over Cap-Bon-Ami in Forillon National Park. The pre-dawn light was bright red, but I couldn't shoot it from the trail (no vantage points). I made it to the tower right just in time for sunrise, which was dulled by thin clouds. There were a few breaks in the clouds with decent light for photos.

Sometimes I become so focused on a destination (the tower) that I overlook better - and easier to get to - locations. After hiking back down to my van, I found that the most photogenic spot was right below the parking lot. By that time I got there, the light had become too drab to shoot. There's a good reason to get back there again.... and I look forward to not having to do that brutal hike again!

The following three photos were shot from the lookout tower. 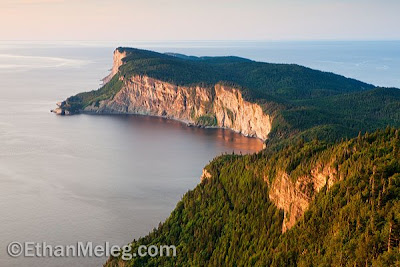 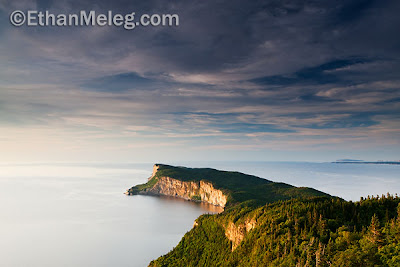 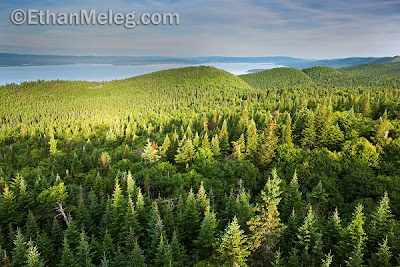 
This evening I made it to the famed Perce Rock and found a beautiful patch of Fireweed, which I used for a foreground. 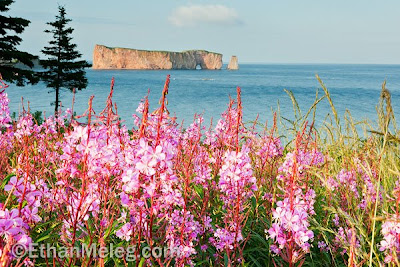